The purpose of this project is to teach you about cache design and how a caching processor generates and services address references.

In this project, you will simulate a CPU cache (unified instruction/data) and integrate the cache into a Project 1 (behavioral) simulator. As the processor simulator executes an assembly-language program, it will access instructions and data. These accesses will be serviced by the cache, which will transfer data to/from memory as needed.

Your cache function should simulate a cache with the following characteristics:

2) ASSOCIATIVITY: varies according to the blocksPerSet parameter. Associativity ranges from 1 (direct-mapped) to the number of blocks in the cache (fully associative).

4) BLOCK SIZE: varies according to the blockSizeInWords parameter. All transfers between the cache and memory take place in units of a single block.

5) PLACEMENT/REPLACEMENT POLICY: when looking for a block within a set to replace, the best block to replace is an invalid (empty) block. If there is none of these, replace the least-recently used block.

Make sure the units of each parameter are as specified. Note that the smallest data granularity in this project is a word, because this is the data granularity of the LC-2K architecture. blockSizeInWords, numberOfSets, and blocksPerSet should all be powers of two. To simplify your program, you may assume that the maximum number of cache blocks is 256 and the maximum block size is 256 (these small numbers allow you to use a 2-dimensional array for the cache data structure).

4. Origin and Servicing of Address References

As the processor executes an assembly-language program, it accesses addresses. The three sources of address references are instruction fetch, lw, and sw. When the program starts up, it will initialize the memory with the machine-code file as in Project 1. These initialization references should NOT call cache_access; they should simply set the initial memory state. Each address reference should be passed to the cache simulator. The cache simulator keeps track of what blocks are currently in the cache and what state they are in (e.g. dirty, valid, etc.). To service the address reference, the cache simulator may need to write back a dirty cache block to memory, then it may need to read a block into the cache from memory. After these possible steps, the cache simulator should return the data to the processor (for read accesses) or write the data to the cache (for write accesses). Each of these data transfers will be logged by calling the printAction function (don’t modify this code at all - but be sure to #include the correct headers. This is also included in the starter code).:

The compiled executable for project 4 requires two files: one file containing a modified solution to project 1s, and one file that manages the cache called cache.c. The compiler will link these two files together to create the executable.

The project 1s solution still contains main, the logic to read in machine code files and perform operations for different instructions. For project 4, main will make calls to 3 functions in cache.c:

1) cache_init, which sets up the cache for later use. 2) cache_access, which services access requests for instruction fetches, loads, and stores. 3) printStats, which prints some extra debugging information and statistics on the terminal.

This picture below shows how the project 1s solution and cache.c interact: 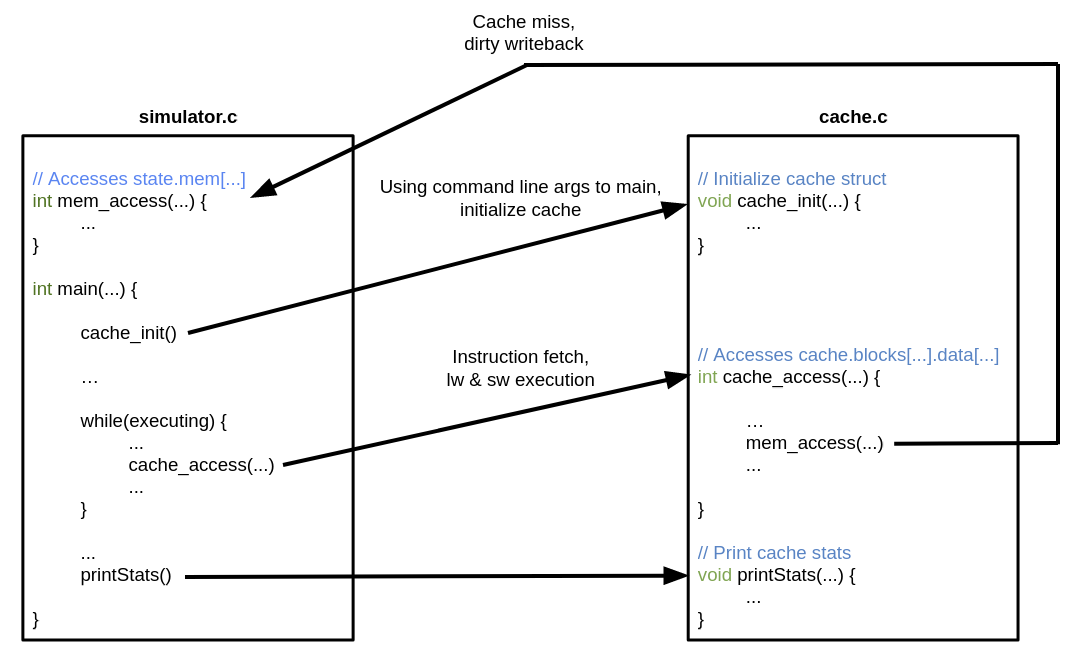 The instructor project 1s solution inst_p1s_sim.o is a compiled version of the C code solution from project 1s, with the modifications listed above. You may assume it calls the 3 functions in cache.c as appropriate, and handles file reading and machine code execution properly. Compared to project 1s, the output is limited: printState is only called for the final state of the machine, and the number of memory accesses are printed at the end. This object file also has one modification to printState: If any sw instruction wrote to a memory location outside the memory defined in the machine code, printState will show these modifications. For example, if the input machine code contained 8 lines, and one sw writes to location 100, printState will print memory values from 0 to 100. After downloading the starter code and renaming starter_cache.c to cache.c, you can compile cache.c with inst_p1s_sim.o using gcc cache.c inst_p1s_sim.o -lm and run the executable on an lc2k machine code file.

If you choose to use the instructor object file, beware of the following particulars: First, this object file is only officially supported on CAEN systems since it was compiled on a CAEN system similar to the autograder servers. If you are not already in the habit of testing your projects on CAEN, it is recommended to follow setup guide from EECS 280. Also, this object file does not contain debug information so that instructors can protect the instructor project 1s solution. This means that debugging with a visual debugger or GDB will only show you what is happening in your cache.c. It also does not call printState on every instruction executed, so print debugging will not be as helpful as if you use your project 1s code. Finally, if you choose to use the starter Makefile, make sure to change the compilation dependecies in there to link with the instructor project 1s solution.

1) Copy your project 1s solution simulator.c and rename it to my_p1s_sim.c.

2) Add the following lines near the top of my_p1s_sim.c, after the global stateType definition, and before main:

If state is declared in main or somewhere else, remove that declaration.

4) For instruction fetches, loads, and stores, replace accesses to state.mem with function calls to cache_access.

5) Upon a halt instruction, after printing the final state of the processor, make a function call to printStats.

6) At this point, if you can compile cache.c with my_p1s_sim.c using gcc cache.c my_p1s_sim.c -lm and run the executable on assembled lc2k machine code. It is recommended to do this for at least one test case from project 1s so that you can see if it runs correctly.

7) Modify output to match what the instructor solution outputs. This is not required, but will greatly aid in debugging. Remove calls to printState except for the final state. Print the num_mem_accesses after printing the final state. For sw instructions, modify state.numMemory so that printState shows the values at memory for any location that an sw writes to. See Section 9 for an example of what output the autograder will see.

5.3. Hints for Either Option

For either method, note that starter_cache.c linked with either my_p1s_sim.c or inst_p1s_sim.o will provide a near-complete version of project 1s, without many of the printed states, and with some statistics printed. It might be helpful to run the starter solution on some of your project 1s test cases to see how that works.

For either method, you will not be submitting a project 1s solution to the autograder. Your cache.c should work properly with any proper my_p1s_sim.c and inst_p1s_sim.o. If you are struggling with one of the above options, try using the other.

The test cases for this project will be short assembly-language programs that, after being assembled into machine code, serve as input to a simulator. You will submit your suite of test cases together with your simulator, and we will grade your test suite according to how thoroughly it exercises an LC-2K cache simulator. Each test case may be at most 50 lines (as this is the limit for the project 1a assembler) and may execute at most 10000 instructions on a correct simulator, and your test suite may contain up to 20 test cases. These limits are much larger than needed for full credit.

For example, the test case in Section 9 would be named p4spec.4.2.1.as. The combination of cache parameters should be legal, meaning that they should all be nonzero powers of 2, and not require a block size or number of blocks exceeding 256 (i.e. blockSizeInWords and numberOfSets*blocksPerSet should not exceed 256). Do not include spaces or extra periods in your file names.

Writing good test cases for this project will require careful planning. Think about what different types of behavior a cache can exhibit and generate test cases that cause the cache to exhibit each behavior. Think about how to test the various algorithms used in the cache simulator, e.g. LRU, writebacks, read and write hits, read and write misses. As you write the code for your simulator, keep notes on different conditions you think of, and write test cases to test those conditions. The instructor buggy simulators will not have error-checking bugs. See Section 7 for how your test suite will be graded.

We will grade on the correctness of your cache simulator and the comprehensiveness of your test suite.

Only output from the calls to printAction, printState (from from the project 1s simulator), and the reported number of memory accesses performed will be graded for correctness and must match the expected output exactly. This means that any lines not containing $$$, or between @@@ and end state will be ignored. Note that the only graded output in cache.c comes from printAction - other graded output is generated by the simulator portion from project 1s.

To help you validate your project, your submission will be graded automatically. You may then continue to work on the project and re-submit. There is a limit of 3 submissions per day with feedback, all other submissions will be recorded but you will not receive feedback until after the deadline.

The results from the auto-grader will not be very illuminating; they won’t tell you where your problem is or give you the test programs. The purpose of the auto-grader is to help you know that you need to keep working on your project (rather than thinking it’s perfect and ending up with a 0). The best way to debug your program is to generate your own test cases, figure out the correct answers, and compare your program’s output to the correct answers. This is also one of the best ways to learn the concepts in the project.

Because all programs will be auto-graded, you must be careful to follow the exact formatting rules in the project description:

1) Don’t modify printAction at all. Download the starter code into your program electronically (don’t re-type it) so you avoid typos.

2) Check your program’s output on the sample assembly-language program and output at the end of this handout. This one test will also be visible in the autograder.

3) Don’t print the sequences $$$ or @@@ anywhere except in printAction(). Any line containing $$$ will be graded, as well as any lines between @@@ and end state (inclusive). You may find the Project 1 printState function or the provided printCache() function useful in debugging, but make sure there are no extra @@@ or $$$ strings.

Ensure that test case names include alpha-numeric characters ONLY

8. Turning in the Project

Use autograder.io to submit your files. You have been added as a student to the class, so you should see EECS 370 listed as a class.

You will submit the following files to the autograder:

Your cache must be in a single C file. We will compile your program on a Linux workstation using gcc cache.c inst_p1s_sim.o -lm, so your program should not require additional compiler flags or libraries. Standard library headers do not require additional compiler flags or libraries. The official time of submission for your project will be the time the last file is sent. If you send in anything after the due date, your project will be considered late (and will use up your late days or will incur a penalty in your grade).

Here is a sample assembly-language program p4spec.4.2.1.as included in the starter code:

and its corresponding output with the following cache parameters: blockSizeInWords = 4, numberOfSets = 2, and blocksPerSet = 1. This output is also included in the starter code folder. Make sure you understand each of the data transfers and their order. Again, see Section 7 to know which lines are graded, and which are there to help you in debugging.